Recent terrorist attacks against businesses and schools in America have caused great concern for the safety of America’s children in a facility without alarm systems.  For centuries man has depended on his best friend (the dog) to alert him to impending danger or an intruder. Technological developments have advanced, and the idea of alarms is to repel intruders in the same manner a barking dog alerts a homeowner. To be abler, alerting homeowners of impending danger, alarm systems are created which consists of control panels and deadbolt locks. High tech gadgets in today’s society have replaced outdated alarm systems. However, security needs have heightened due to the numerous terrorist attacks in recent years such as Columbine and The World Trade Center which is known as 9/11. This article will address the history of alarm systems and the future system to notify intended recipients in the case of an emergency.

In the eighteenth-century, the element of surprise and noise such as the barking dog or clanging bells was thought to be the best deterrent against crime. Patent records reveal the first electromagnetic enforcer against burglary was registered in 1853 by an inventor named Augustus Russell Pope. Pope created a simple battery-operated gadget which was connected as independent units by a parallel circuit. In the event, a window or door was opened, and the circuit was closed, the sudden flow of current caused vibrations to be transmitted to a hammer which struck a brass bell. In addition, versions of these primitive alarms were utilized to protect affluent families who lived in the city. However, Pope sold the rights for his invention to a businessman by the name of Edwin Holmes.

Holmes bought the rights to Pope’s design in 1857. Mr. Holmes founded the first company of electrical alarm systems, and Holmes is credited with establishing the electromagnetic alarms. He opened “Holmes Electric Protection Company.” Holmes exploited the fascination people had with the Telegraph to promote the idea for his alarm system by utilizing numerous patents for insulating telegraph wires. He and his son Edwin T. Holmes convinced the Boston and New York phone companies to allow their customers such as Tiffany and Lord & Taylor to utilize unused telephone lines at night to support the innovative alarm system.

Edward Callahan invented the first gold and stock ticker in 1867 that allowed price changes to be transferred rapidly to investors. The idea for a central monitoring station was created after Callahan’s boss Elisha Andrews was the victim of a burglary and robbery. Callahan was determined to protect his boss and others affiliated with the stock market. Callahan created an emergency call box that serviced fifty of Andrew’s neighbors. Callahan’s system was designed to alert other neighbors by assigning a certain number of rings for each house that would signal others. For example, if an alarm rang in house A, houses B, and C were notified. In addition, Callahan expanded his idea by dividing New York City into districts that would be connected to a central monitoring system. In the event of an emergency, a messenger boy was sent to arrange for help in a particular district.

Furthermore, the emergency boxes invented by Callahan are still utilized today for police, fire, and messenger services. Callahan utilized the idea of obtaining help in the event of an emergency to form the American District Telegraph (ADT) in 1871 which has become largest security company nationwide today. However, ADT is currently facing numerous lawsuits because they knowingly failed to inform customers of the possibility their system is not encrypted and easily hacked. A recent article by Field (2016) states an unauthorized third party can access ADT’s software and view when homeowners are opening or closing a door which leaves homeowners vulnerable for a burglar to invade their home. 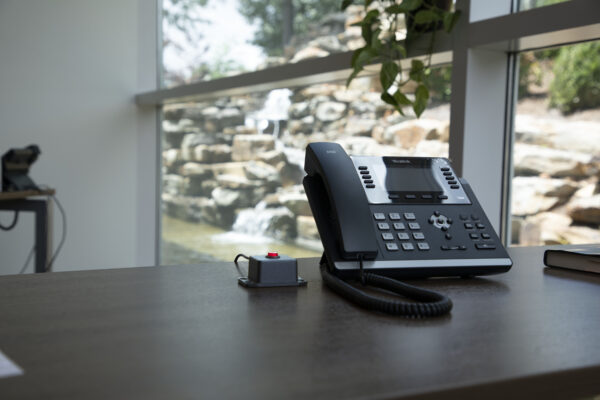 After WWII, alarm technology progressed and became more affordable; thus, improving security across the nation. Engineers integrated motion detectors in alarm systems in the 1970’s. By the 1980’s alarm systems had become a safety measure that was installed when buildings were erected. Over the past four decades, technology has improved to include wireless alarm systems which are a vast improvement over the early alarm systems that required an unavoidable conglomerate of unsightly wires and cables.

In conclusion, TeamAlert is an innovative system that surpasses other alarm systems because this panic button system created by TeamAlert offers

technology that alerts responders via real-time communication to eliminate the question of whether or not the duress signal was received and help has been dispatched. Existing alarm systems take several minutes to alert one responder, and there is no confirmation the signal was received. In addition, the average cost of these systems is approximately $20 per month, per device. On the other hand, TeamAlert alerts multiple responders in seconds and confirms the details of the alert with centralized communication with an average cost of $4 per month, per device. For a more reliable, innovative, and affordable security system that is capable of notifying intended recipients instantly, contact TeamAlert. With TeamAlert you can “Live in your world. Be secure in ours”.