The issue of classroom violence is up-front and center for the children who attend school every day. The threat of violence in schools is very real. According to Everytown for Gun Safety, there have been a total of 220 shootings on school campuses since the Sandy Hook Elementary mass shooting on December 14, 2012. The statistic holds accurate as of April 11, 2017. That number also includes incidents that did not target students or teachers, such as accidental firings or suicides. An emergency response plan for classroom violence, along with a holdup switch from CRS Notify, is something much-needed to keep schools from becoming another statistic.

What is an Emergency Response Plan for Classroom Violence?

What is the Main Reason to Have a Holdup Switch for Classroom Violence?

The idea behind having holdup switches for classroom violence is to lower the time between the onset of an incident and when responders are on the scene. The goal is to notify responders rapidly. This allows for quick de-escalate any crisis, which lowers the opportunity for victimization. The large time delay of the traditional holdup switches is the reason why they are rapidly becoming discounted and ruled ineffective by responders.

Does Technology Offer Solutions for Holdup Switches for Classroom Violence?

Yes! Technology has caught up and revolutionized the way people respond to situations. The increase in global in domestic terrorism creates a clear and imminent need to have holdup switches for classroom violence. People believe mobile apps are the cure-all for these types of situations. However, an app is not solely the best option. Think about if there was an emergency. Would you have time to find your phone, open it, and locate the app to raise a panic? Furthermore, phone app holdup switches focus more on individuals rather than buildings and people inside. 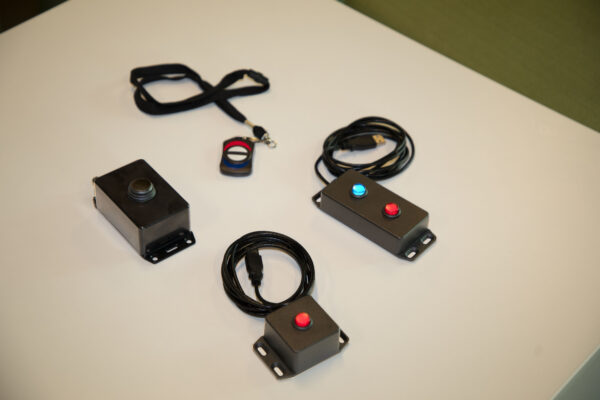 When Choosing a Holdup Switch Consider the Facts

Still Unsure About a Holdup Switch?

Contact us for more information to make the best decision for your holdup switch.