Teachers already have a lot on their plates just with their everyday jobs. Between actually teaching and having to keep order in the classroom, teachers have their hands full! They should not have to worry about a violent student in the classroom. Unfortunately, violence is at the forefront in this day and age. A panic alarm for schools from CRS Notify can help teachers get in contact with colleagues and authorities quickly, saving seconds in an emergency, when they matter the most.

What is the Difference Between a Traditional and Technology Driven Panic Alarm for Schools?

There is a major problem with the traditional panic buttons for schools. This type of panic button system is a blanket product that usually requires a construction crew to install which interrupts daily school activities. Many traditional buttons are offered through local alarm companies. The alarm company hardwires the panic devices in through your phone system to be able to send out alerts. Unfortunately, you do not know how long it takes to contact responders or if it is even working. CRS tested some old-fashioned panic systems a few years ago. We are still waiting for the confirmation to go through that the alert was received. The old school panic button defaulted, and no one knew. Imagine a situation where you think the signal went through to responders and it did not. What do you guess is going to happen?

Software-driven alert systems offer security initiatives in a panic button for schools that is technology-based. CRS Notify integrates internal and external notification alerts to multiple people, using multiple channels ALL at the push of a button. You also get the benefit of multiple alert levels instead of just the one alert level offered by traditional panic systems. Furthermore, CRS Notify also provides E911 integration. This means the warning system will notify employees through multiple channels, as well as call your local 911 dispatch. Additionally, a panic alarm from schools from CRS Notify is easier to manage.

Why is a Traditional Panic Alarm for Schools a Mistake?

What is the Main Reason to Have Panic Buttons for Violent Students? 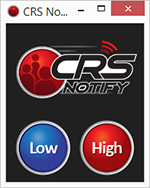 The idea behind having panic alarm for schools is to lower the time between the onset of a violent incident and when responders are on the scene. The goal is to notify responders rapidly. This allows for quick de-escalate any violent crisis, which lowers the opportunity of victimization. The large time delay of the traditional panic buttons is the reason why they are rapidly becoming discounted and ruled ineffective by responders.

When Choosing a Panic Alarm for Schools, Consider the Facts

In conclusion, a panic alarm for schools are far more reliable than the old school panic buttons of yesterday. New age software alerts systems are also far less expensive and easier to install. When choosing a panic buttons for your school, step into the 21st century. Leave the outdated panic button systems in the past where they belong. Panic alarm systems should be updated regularly to combat our country’s growing statistics of crime. Don’t be left behind in the technology revolution.

Still Unsure About a Panic Alarm for Schools?

Contact us for more information to make the best decision for your panic alarm for schools.